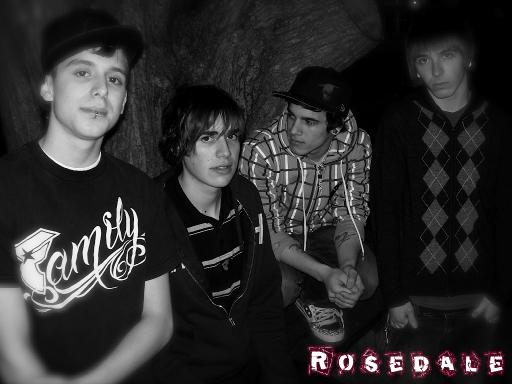 Looking back four years ago, if you had asked all the band members of Rosedale what music meant to them, their reply would be exactly the same as it is today. "It's the greatest combination of fun, goals, and creativity. Its a lifestyle and I don't know what any of us would do if we missed out on it for one day." - Mike Liorti

Extremely strong willed, and with plenty of musical passion, Rosedale shows no signs of slowing down anytime soon. In April of 2006, Rosedale had set out on their freshmen tour with friends "Hello Kelly" (7 Spin Records), soon followed by the release of their debut album "Past Times With Old Friends". "Each song on the album is a story waiting to be told, and the deeper into the album you get, the more it begins to unfold into a life story that anyone can relate to. Isolation, feeling insecure, friendship and losing something that means everything are just a few of the underlying themes that have made our record what it is today." - Jon Podzyhun (Former Bassist)

If a picture is worth a thousand words, then Rosedale's video for "You'll Count To Ten" will leave many speechless. It's an epic story of life and death, insinuating emotions drawn from all of the senses giving day to day struggles that life throws at you, whether you like it or not.

So just like their video, Rosedale was faced with one of the hardest situations that life could have thrown their way. Former lead vocalist, Steve Mitchell had parted ways with the band. "It was a shock for everyone in the band. But whatever doesn’t kill a man, will definitely make him stronger." - Emmo Tavares. This was followed by their bassist, Jon Podzyhun, loosing passion for music, leading Rosedale to the decision of trying out an old friend, Mike Zancai, who had the emidiate spark they've always been looking for. Mike Z joined the band in the end of March and was not only learning things fast, but making a strong contribution to Rosedale's music.

With all these huge changes, Rosedale gathered all their combined energy and set out with one goal, to make things right again. They were motivated to take everything to the next level by revamping their show, sound, and songs in a different light. When Rosedale played their first show with Mike Z at Brampton's Hype, on April 14th, 2007, they knew it was right again, and that it was only the beginning.

Combined with their diverse approach to music, Rosedale draws many musical influences ranging from Blink 182, Boys Like Girls, The Ataris, Coldplay, Taking Back Sunday, The Starting Line, The Postal Service, 311, RHCP, Underoath, and hometown favorites; Moneen.

Rosedale » Guestbook
The guestbook entry was successfully created!
You must be logged in to post to this guestbook!