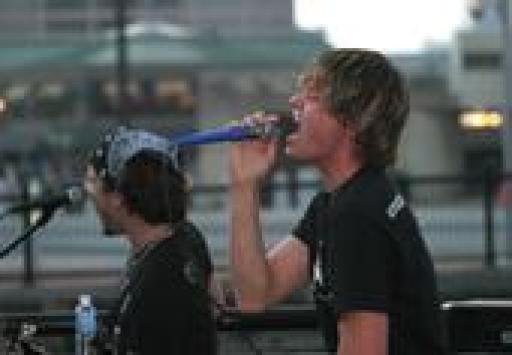 Philadelphias PLAY magazine describes Not Alone: "Its been said that Not Alone is best when its live... Not Alone has got everything, guitar to rhythm with an excellent stage presence and catchy lyrics that pull you right in... They are the evolution of classic guitar for the modern era. Their harmony, pure 'instrumental athleticism' and song writing talent bond to generate a distinct musical force. Brothers Tyler Schock (vocals) and Eric Schock (lead guitar/vocals) comprise the foundation upon which this band ROCKS. And ROCK they do, with a distinctive guitar-driven modern sound that is decisively anchored on the rock of the greatest classic gods to ever swing an axe and peppered by the inspiration of the most notable contemporary influences. The group is soundly rounded-out by the formidable talents of Steve Zegray (drums). Innate harmonies, instrumental dexterity and formidable song writing talents bond wholly and enthusiastically to generate a force that is truly distinctive to Not Alone. The kinetic energy and tenacious work ethic that they impart fuel poignant and hooky guitar-driven songs which display a wide range of dynamics, emotions, proficiency and attention to melodious detail. In January of 2004, Not Alone entered a recording & production deal with renowned Grammy nominated producer/engineer David Ivory who is known for his work with Silvertide (J-Records), Halestorm (Atlantic), The Roots, Kindred, Erykah Badu, Patti Labelle, etc. Under Ivorys tutelage, Not Alone has focused on writing, producing and recording killer rock tracks with great hooks, crunching guitars and screaming leads that have fans addicted from the first listen. This hard working band routinely tours from Virginia to upstate New York and has shared the stage with national acts Silvertide, Saves the Day, Quietdrive, The Classic Crime, and Sinch. In early 2006, Not Alone advanced to the Semifinals of the national Zippo Hot Tour contest (top 80 unsigned rock bands in nation); was chosen as a featured artist of the week on SonicBids.com and PulseRated.com (U.K.) among others. Also in 2006, Not Alone had tracks featured on four compilation CDs including Jaxons Local Shots Vol. II produced by 93.3 WMMR in Philadelphia. Not Alone was also chosen to headline on The X 105.7/Jack Daniels main stage at the 10th annual Millennium Music Conference and showcased at the Rusty Rudder during the 2006 Dewey Beach Music Conference. All of Not Alones tracks can be heard on commercial radio 93.3 WMMR (Philadelphia); 98ROCK (Baltimore, MD); X106.9 FM (Ocean City, MD); Ocean 98.1 FM (Ocean City, MD); 95.1 WZZO (Allentown, PA); 105.7 The X (Hersehy, PA); 93.7 WSTW (Wilmington, DE); XM Satellite channel 52 (U.S.); Pulse Rated Satellite (U.K.); and Extreme Radio in the U.K. among others. Station formats that spin Not Alone are diverse stretching through Hard Rock, Alternative Rock, Modern Rock and Pop Rock. Socially conscious, Not Alone annually contributes its talents to numerous select fund raising efforts for local and national charity organizations. In the fall of 2005, the band organized and headlined Rock The Gulf as well as contributing their talents to four other fund-raising concerts all to benefit victims of hurricanes. Additional information on Not Alone can be found at notaloneband.com or by calling 610.473.7377 and requesting a press kit. Not Alone is sponsored, marketed and managed by Impact Artist Promotions.