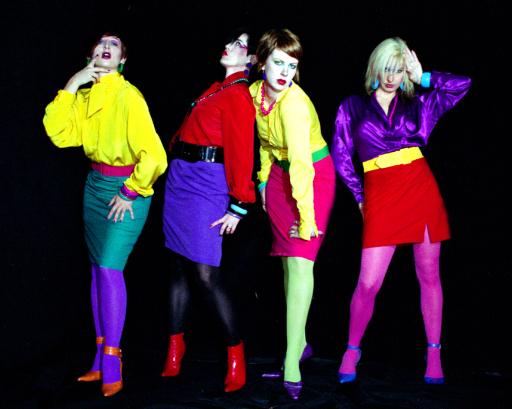 Hailing from the capitol of Florida, GIRLS ON FILM are an all-female 4-piece whose music is one part lipstick synth-pop and one part icy cold new wave. Their fashion fueled combination of high-energy stage antics and Dancetronic Glam Wave - their signature sound - have earned the band a reputation as one of the hottest new wave acts out of the Southeast.

With their first release in 2003, the Love Robot EP, surrounding buzz stirs attention for the band and leads to radio & internet play, TV appearances and an in-demand stream of bookings and interviews. They play several prestigious music festivals in 2003-2004, including the Jacksonville International Connexion Music Festival, Cincinnati's Midpoint Music Festival, and NYC's M.E.A.N.Y. Fest. The Girls find themselves sharing the stage with the likes of legendary London rockers The Fixx, west coast new-wavers Glass Candy, MC Chris, The Bangs, VHS or Beta, The Start, Rasputina, the Impotent Sea Snakes, and MTV's Teck, among others.