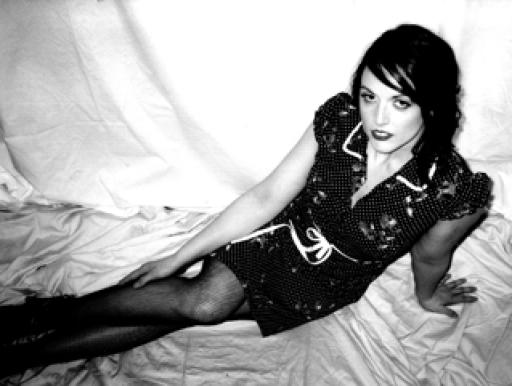 Jodi Jett (yes that's her real name and no, she's not related to Joan) grew up in another Manhattan before moving to New York in the late nineties to pursue life and music.

The Little Apple of Kansas that Jett calls her hometown frothed with religious fervor and didn't allow her much exposure to rock and roll. In fact, the only musical performances Jodi participated in during her young life involved leading her church in song. Until a few years ago, Jodi didn't even know how to play the guitar. Comparisons to Liz Phair and Lou Reed meant little to Jodi when she debuted on the local music circuit. She had never heard of them. Yet, Jodi makes the kind of rock music that kicks about with desperation in its blood. Its the sort of thing a blues man double her age and experience might reach. That's the very reason Five-time Grammy-winning Engineer/Producer Elliot Scheiner (Beck, Bob Dylan, Flaming Lips) was blown away when he heard her music and made the comparison. "Unique and intelligent. I haven't heard anything like it in a long time," he exclaimed.

She proves it song after song on her debut album, Revelations, on Love Rock Records. Life in the bible-belt certainly didn't bring about songs like Bedford Avenue but Jodi's Midwestern upbringing did start a search beyond religion. It is a search that has fewer concrete answers than her previous life, but one that she credits to fueling her songwriting and creative voice.

Album co-producer Phil Palazzolo (New Pornographers, Radio4) describes Jett's music as having "come from that elusive crossroads where naivete and sophistication stop to have a quick drink together. Those contrasts and conflicts make Revelations a layered record that reveals itself slowly with a big payoff." Guitarists Peter Mavrogeorgis (Vanity Set), John Nugent (Chop) and Matt Rocker (Sweetblood) all contributed to the record. Bassists Byron Isaacs (Joan Baez) and Tom Ward (The Dansettes) along with drummers David Berger (Erin McKeown) and Angela Webster (The Holy Ghost), and cellist Jane Scarpantoni (Norah Jones) also helped. Revelations was officially released in the Spring of 2006.