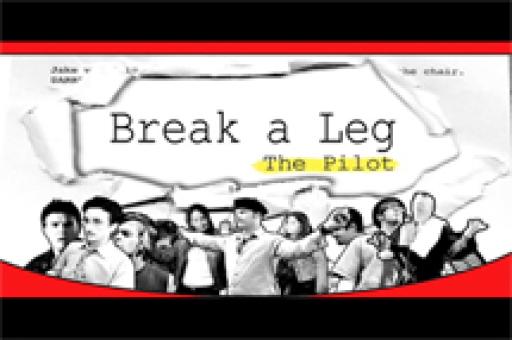 About Break A Leg

BREAK A LEG is the story of DAVID PENN, a writer who just got his first sitcom deal. GROOMMATES, his show about three ex-grooms living with their two ex-wives, replaces the previous hit, SWAMBLERS – a rollicking story of gambling cowboy swingers roughing it in the Wild West, Swambler-style. The writer/creator died – which is good news for David, because now he gets his own show.

Besides the regular trials and tribulations that come with shooting a sitcom, David has one other problem – he’s going to die at the end of the season. How? That remains to be seen. Why? That’s another important piece of information that David has yet to figure out. But as he narrates his story from beginning to end, one fact remains -- he will die, in the storage room, with a gun to his head and the sounds of a fake laugh track in his ears.

Will GROOMMATES be a hit? Will he win the hand of the feminist, ex-SWAMBLER turned secretary turned GROOMMATE? Will he get the respect he deserves from the likes of Jennifer John Bradley, the director and Sebastian Windlethorpe III, the producer? Will Andy Corvell, the network head who has never actually been seen, keep GROOMMATES on the air? And finally, will David, in fact, survive this ordeal?

A show not only about show business, but relationships, fame, entertainment and death – BREAK A LEG, the first "adventu-com" -- is a delicious mix of quick wit, adventure and murder -- like a very dangerous I Love Lucy.